Here are some info from King's official message board about a chapter for Hearts in Atlantis and also a hit that King is hard at work at new projects.


Question:
I read the intro of "Low men in yellow coats" present in "Stephen King goes to the Movies" and it mentions one chapter King didn't write yet for Hearts in Atlantis. It's called "The house on Benefit Street" and it's the story of what happened to Carol (Bobby childhood's girlfriend).

Any news about this? Does King plan to write it? 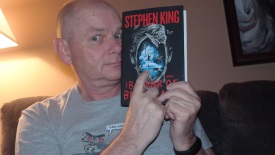