Here is the papaerback cover for Just After Sunset that's released on September 22. You can pre-order your copy here. 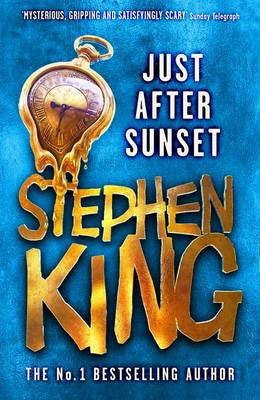 Here is the cover for the UK paperback edition of Just After Sunset that's released on September 3rd.

Just After Sunset in paperback

Just After Sunset is being released in paperback on September 29.

Here are some photos of the UK limited (to 500 copies) of Just After Sunset: 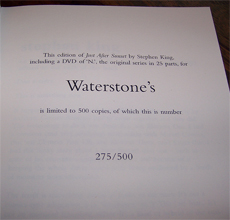 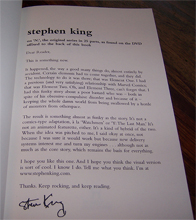 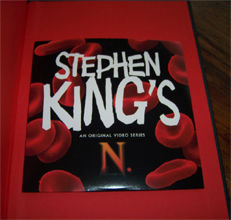 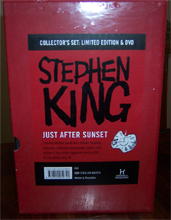 Thanks to Matthew Crossman

Here is a video interview with King, done at Borders. In it he talks about Just After Sunset and Duma Key. He also mentions Under the Dome at the end. 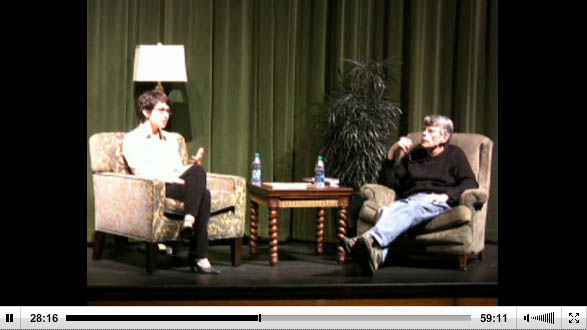 Thanks to Larry Fire

Tomorrow November 11th King's new book Just After Sunset is released. I have read it and here is my review of it.

There seams to be a limited edition of Just After Sunset released in the UK. This limited edition of only 500 copies numbered and presented in a slipcase will include a facsimile letter from Stephen King, and a DVD with a graphic animation film of N.. You can order your copy here (scroll down a bit and you’ll find it).

Want a signed copy of Just After Sunset?

Good news! Since this contest has been such a huge success I’m (with help from Simon & Schuster Audio and King himself) throwing in one more prize for you to win and a small way for me to say thanks to all of you for your support for Lilja’s Library…

From all the right answers that I get during the entire contest I will draw one lucky winner that will get a signed (by King) copy of the audio edition of Just After Sunset. It means you’ll have nine chances (if you’ve answered all nine questions) to get your own signed copy of Just After Sunset.

You can enter the contest here.

The winner in Hodder & Stoughton’s trailer contest has been selected and the winner is Red Clark. You can see the trailer here.

Here is an excerpt from Just After Sunset. The clip is from Harvey's Dream and read by King.

Check back on Monday Nov. 3rd when I'll have a contest you don't want to miss.

Just After Sunset is soon out and here is a photo of the finished book. 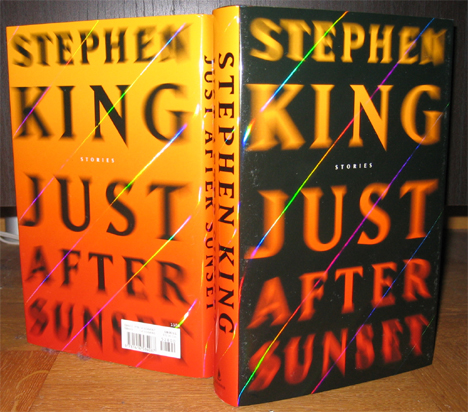 I just heard that the Italian version of Just After Sunset will be called Al Crepuscolo and released on October 21st. If that is correct it would be the first edition released. It's quite rare that there is an edition released ahead of the US ed. and I'll make sure to check this out some more...

Thanks to Matteo Zampini

Interested in winning a signed copy of Just After Sunset? All you have to do is create a trailer for the book in a contest King’s UK publisher Hodder & Stoughton is running. More info here.

Narrators of Just After Sunset

Here are the narrators of the stories in the audio edition of Just After Sunset:

- Ben Shenkman (reading "The Things They Left Behind" and the character Johnny for "N.") 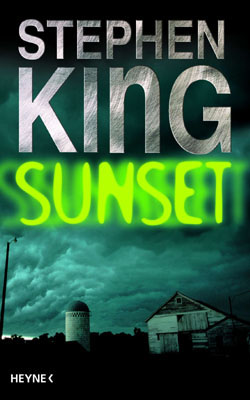 Here is the cover for the German edition of Just After Sunset. It's title is Sunset and it will be out in mid November.

Description of Just After Sunset

Here is a description of Just After Sunset:


Just After Sunset
Stephen King. Scribner, $28 (384p) ISBN 978-1-4165-8408-7
In the introduction to his first collection of short fiction since Everything’s Eventual (2002), King credits editing Best American Short Stories (2007) with reigniting his interest in the short form and inducing some of this volume’s contents. Most of these 13 tales show him at the top of his game, molding the themes and set pieces of horror and suspense fiction into richly nuanced blends of fantasy and psychological realism. “The Things They Left Behind,” a powerful study of survivor guilt, is one of several supernatural disaster stories that evoke the horrors of 9/11. Like the crime thrillers “The Gingerbread Girl” and “A Very Tight Place,” both of which feature protagonists struggling with apparently insuperable threats to life, it is laced with moving ruminations on mortality that King attributes to his own well-publicized near-death experience. Even the smattering of genre-oriented works shows King trying out provocative new vehicles for his trademark thrills, notably “N.,” a creepy character study of an obsessive-compulsive that subtly blossoms into a tale of cosmic terror in the tradition of Arthur Machen and H.P. Lovecraft. Culled almost entirely from leading mainstream periodicals, these stories are a testament to the literary merits of the well-told macabre tale. (Nov.)

According to Galley’s of Just After Sunset the book will have an intro by King that is four pages long and also notes, called Sunset Notes that runs 7 pages and looks quite a lot like the notes in Nightmares & Dreamscapes.

Check out my review of The New York Times at Special Bargain Rates.

UK cover for Just After Sunset 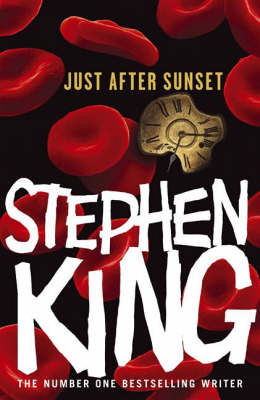 Here is the UK cover for Just After Sunset.

The Cat from Hell

King's official site has now revealed that The Cat from Hell also will be in the upcoming Just After Sunset.

It seems King has changed the title of the upcoming collection from Just Past Sunset to Just After Sunset.

Thanks to Takeo Harada

Here is a synopsis for Just Past Sunset from Waterstone's:


What would you do if your everyday world were turned upside down in an instant? Here are twelve riveting stories about relationships with unexpected twists. Be very careful what you wish for.Read about the acts of kindness from strangers: 'workmen' who intervene in the obsessive exercise regime of a middle aged artist in Stationary Bike; the unexpected visitor, a blind girl, whose kiss saves a dying man; a mute hitchhiker who helps a driver get over his wife's affair.There are tales of obsession and fights for power: The Gingerbread Girl runs and runs to ease her pain; two neighbours contesting for a piece of land get into A Very Tight Place and a man who witnesses an act of domestic violence in a Rest Stop needs to step into his identity as a crime writer if he's to intervene.Then there are the unexpected outside events which turn people's world's upside down or the right way up: a young couple, David and Willa who are derailed on a train find themselves seeking the bright lights in a nearby town -- and playing the jukebox, for eternity; an older couple want to punctuate the banal humdrum with something unusual -- until it happens.

Now you can pre-order Just Past Sunset from Amazon:

US hardcover
US audio

Stories in Just Past Sunset

Here is news about the stories in Just Past Sunset:


Sunset in the UK as well

Hodder & Stoughton tells me that their edition of Just Past Sunset will be out November 11 as well.

Scribner now lists Just Past Sunset for release on November 11, 2008. The book will be 400 pages long.

Here are some of the news we have been waiting for about the upcoming collection:

The title for Stephen's new short story collection has been chosen. It will be titled Just Past Sunset. The publication date and story list are still being finalized but a fall 2008 date is a possibility.

King comments on the new collection in an interview with USA Today:


His next book will be a collection of short stories, but he and his publisher can't agree on a title. He wants to call it Unnatural Acts of Human Intercourse, which "could be a tough sell in some markets."

King also commented on a new book he is working on:

He also has begun work on another novel, but he won't discuss it for fear of "bad luck. If I didn't think it would work out, I'd talk your ear off about it," he says and laughs.

Title of new collection not finalized

Last day's topic has been the new title of King's next book (the collection) and when I asked King's office about it they said that "details regarding the book, including the title, have not been finalized" which means that Unnatural Acts of Intercourse might or might not be the final title.


His next book of short stories, Unnatural Acts of Intercourse, will come out this fall or next spring, and he's working on a "novel that's going to be very long. I'll be killing a lot of trees if it gets done." 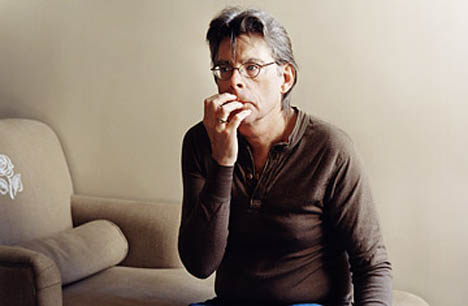 It’s now confirmed that King will release a collection after Duma Key. This is what the moderator on the official message board said:


The next book after Duma Key will be a short story collection and most of the recent ones published will be in that.

I also just got confrimation that once the book is out it won't be called Pocket Rockets.

Get ready for Pocket Rockets

As some of you might have guessed it's now confirmed that King has enough stories for a new collection. This is from the official message board:


It's already on the planning board. There are finally enough new ones to complete a collection. It's titled (at least for now) Pocket Rockets...I don't think I'm at liberty yet to reveal which stories will be included, but will do so as soon as I can. 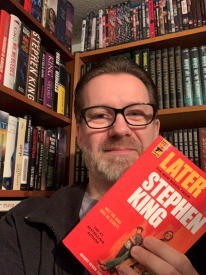