IMAX now reports that The Sun Dog has been dropped from IMAX's development slate.

Sun Dog to be filmed

The Sun Dog: White Cap Productions and Imax Corporation will produce large-format 3D Adaptation of Stephen King's novella, "The Sun Dog". It will be distributed to the rapidly expanding worldwide network of IMAX 3D® theatres. Production is expected to begin in 2000 and Lawrence D. Cohen, who is writing the screenplay, will executive produce with Michael Gore, who will also be scoring the film.

"This amazing story, with its glimpses of a bizarre and fantastic other world is the perfect vehicle for Imax's giant-screen 3D format. We are very pleased to have "The Sun Dog" on our production slate and are delighted to be working with Larry, Michael and Stephen on this exciting project. We also believe "The Sun Dog" will have special appeal to millions of Stephen King fans and will also introduce many new movie-goers to Imax's 3D world of experiential large-format cinema."
Imax co-CEO Bradley J. Wechsler

Here is a description from IMAX web page

STEPHEN KING'S THE SUN DOG
Based on the master of horror Stephen King's short story from his #1 best seller Four Past Midnight, with an adaptation by Larry Cohen, whose credits include Mr. King's CARRIE and IT. Fifteen-year-old Kevin Delevan wants only one present for his birthday, the Polaroid 2000 Sun camera. From the moment he receives the camera his life becomes effected by this seemingly inanimate object that has a diabolical mind of its own. 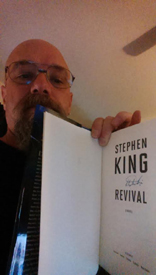