Isn't King good enough to have written Desperation? Well, he is...if you ask Christina Starobin a poet, author and assistant adjunct professor at Ulster County Community College in Stone Ridge, N.Y. he is. She claims King stole ideas from her novel Blood Eternal and added them to Desperation.

Thanks to Ed for sending me the article.

A federal judge in New York has dismissed with disdain a complaint by a writer and adjunct literature professor who claimed that prince of horror Stephen King stole her work.

U.S. District Judge David N. Hurd of the U.S. District Court for the Northern District of New York shot down Christina Starobin of Saugerties, N.Y., for engaging in a "recurring and vitriolic attack upon the character and abilities of King."

Starobin had written a novel, Blood Eternal, about vampires who run a car service in suburban New Jersey. The copyrighted novel was submitted to Penguin and then returned to Starobin on Sept. 20, 1996. Two days earlier, King copyrighted his novel, Desperation, which was published by Penguin.

The complaint alleged that King, whose 40-plus books have sold millions of copies, is essentially devoid of literary talent, could not have written Desperation on his own and pilfered from the work of Starobin during the three months her manuscript was in the possession of Penguin. About the only similarity Judge Hurd found between the two novels was that, in his opinion, neither was very good.

"There are no common characters, locations or occurrences shared by her novel and King's," Hurd wrote. "There are no common references to popular culture, historical events or common sequences of events ... . When the two works at issue are viewed as a whole, it is utterly beyond dispute that no reasonable person could regard them as similar, much less substantially so."

The judge added that he was not all that impressed with King's literary abilities either. Hurd said he had never before read a Stephen King novel, and was not exactly enthralled by the horror writer's tale of an evil spirit that emanates from a mine in the Nevada desert and possesses passers-by, transforming them into homicidal maniacs.

"Quite frankly, neither work was a particularly good read," Hurd said, referring to Desperation and Blood Eternal, both of which he said were read cover-to-cover.

Regardless, Desperation spent some 15 weeks on The New York Times best-seller list in hard cover and was highly successful as a paperback.

Starobin repeatedly contended that her literary credentials are superior to King's, and that assertion alone established an issue of fact as to whether King is capable of writing Desperation.

She attempted to bolster that point with this statement from her plaintiff's memorandum:

Judge Hurd, however, termed Starobin's conduct "reprehensible," considered her character attacks on King unseemly and found it "disheartening that a person of plaintiff's education and self-professed abilities would resort to such attacks, particularly in light of the obviously baseless nature of her claims." 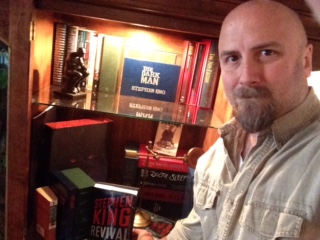