BANGOR, Maine (AP) Stephen King's insurance company settled a lawsuit with the horror writer by donating $750,000 to the hospital that cared for him after he was hit by a car two years ago.

King sued OneBeacon Insurance for $10 million in February, claiming it failed to provide full coverage for injuries he sustained when in the accident.

King was insured personally and by his business policy, both through Commercial Union, which was later bought by OneBeacon. But his lawsuit claimed an umbrella policy should entitle him to additional payments.

King suffered a broken leg and hip, punctured lung, broken ribs and other injuries. He has undergone five surgeries since the accident.

Tony Payne, vice president of marketing for OneBeacon, said the donation to Bridgton Hospital was a compromise.

"(The lawsuit) wasn't likely to be easily resolved without long and expensive litigation,'' he said. ''So we collaborated and said, 'How can some good come out of this that can impart community good?"

The Kings summer in Lovell, and live the rest of the year in Bangor.

King donated $100,000 to the hospital after the accident. The Stephen and Tabitha King Foundation, a charitable organization King founded with his wife, donated $500,000.

"They're wonderful supporters of the hospital," said Pamela Smith, director of development and community relations at the hospital. "He realizes how important keeping a community hospital in the Lakes Region is."

The contribution helps completed a capital campaign to pay for a new hospital building. The building is slated to open in December. 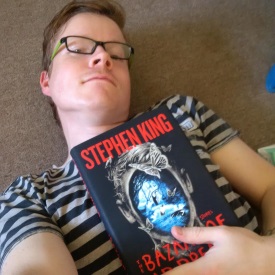