About 140 attend Stephen King book signing in downtown Bangor By Dale McGarrigle, Of the NEWS Staff 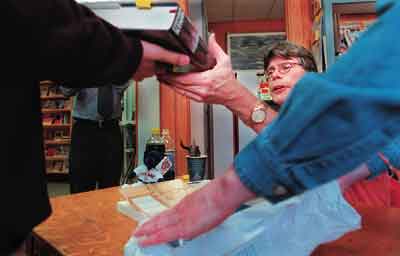 BANGOR — A small, ever-changing group milled for two hours Wednesday on the corner of Harlow and Central streets.

Now, clusters of people, while not the norm, are not unheard of in downtown Bangor, especially at lunchtime. But all of these people were holding books, and many grasped cameras as well.

Those pressing their faces to the Harlow Street window of BookMarc’s bookstore soon figured out what was happening.

One of Maine’s favorite sons, best-selling author Stephen King, was holding a rare book signing, this time for his new nonfiction book, “On Writing,” and his fans flocked from around the Northeast and beyond for the event.

The signing marks the fourth time in its 10-year history that BookMarc’s has hosted King. The signing is thought to be the first one that the recuperating author has done since being struck by a van June 19, 1999, a fact that BookMarc’s owner Marc Berlin recognized.

“We made a special effort not to push the envelope,” Berlin explained. “We know what he can do [in terms of books signed], so we went on the conservative side.”

Almost all the fans had previously bought “On Writing” at BookMarc’s, at which time they were given a number as a reservation for the signing.

Berlin estimated that more than 90 percent of those getting books signed came from Maine. The rest, he said, likely came after news of the signing hit the Internet a couple of weeks ago.

King’s latest book is both a primer on writing and a miniature autobiography, with a postscript on the accident that left him severely injured.

King sat, a pillow underneath him, behind a card table near the store’s Harlow Street door.

The orderly line stretched across to the Central Street door. Berlin served as gatekeeper, letting in about 20 people at a time. Each person could get two books signed. Off to the side, soaking in the atmosphere, was a trio of Skemers. These Skemers weren’t plotting anything; instead they are members of a Stephen King e-mail group.

Skemer Dani Davis of Orono collects only hardcover, trade first editions of King’s work. She’s missing only “Cycle of the Werewolf,” “Carrie” and “Hearts in Atlantis.” Davis was attending her first King signing.

“What I like most about his work is that it’s so easy to identify with the characters,” she said. “It’s so easy to get caught up in the book.”

Fellow Skemer Cheryl, a.k.a. C.J., who didn’t give a last name, drove 4˝ hours from her New Hampshire home for her first signing. She runs the 90-member “King’s Home Away From Home” club on Yahoo.

“You’re right in the story, and feel like you’re part of it,” she said. “I love the New England aspect of it, since I’m from New England myself.”

Michael Altemeier, 14, skipped school and flew in from Dallas for the event, landing in Bangor at 8 a.m. Wednesday. Altemeier, who owns about half of King’s books, is a budding writer himself.

“I think I am the biggest King fan,” he said. “I’d never seen him live, so this is a once-in-a-lifetime opportunity.”

Holly Newstein drove 11 hours from her home in Reading, Pa., to be at the event.

“I’m a big fan of Stephen’s,” she said. “I was up here two years ago for the ‘Bag of Bones’ signing. This is one of his first since the accident, and I’m just delighted he’s still here.”

Chris Mullen drove four hours from Manchester, N.H., to get a signed book for a big King fan, his brother Jeff, whose birthday is today.

Is Mullen himself a fan?

“I watch his movies. He has a great talent,” Mullen said.

At the other end of the line, King signed books, posed for pictures and talked with his fans. About one-third of the people at the signing had some connection to the author, however tangential.

The son of a doctor who treated King’s family told the author his father’s name, and King said, “He ought to read the book. He might have prescribed some of the stuff I wrote about.”

Another hot topic was baseball. Several wanted King to buy his beloved Boston Red Sox, which he refuses to consider.

More than a few fans came bearing tribute. Teen-ager Cody Mitchell of the Boston area presented King with a modified action figure, meant to represent Roland, the gunslinger from the “Dark Tower” series. King first placed it in his pocket, then stood it in an empty Styrofoam cup.

He seemed genuinely touched when a young girl named Lexie presented him with her red drawing of King’s West Broadway home, emblazoned with the message “Happy Halloween.” On the side of the table were Boston Red Sox and bat — the flying kind — beanies.

Finally, Altemeier stepped up to the table, shaking, as his mother videotaped the historic meeting. When King inquired how he was, he said, “Absolutely, absolutely perfect.”

King replied, “You can’t be from around here, since you act like I’m incredibly important.”

Others told about their experiences with King’s books. One woman named Chelsea recalled: “My mother read ‘Carrie’ to me when it came out, but she read it in a happy voice.”

A pregnant woman wearing a T-shirt which read “Stephen King fan under construction” asked King to sign her belly. When he politely declined, she asked him to initial her shirt instead, which he did.

He did sign the arm of one man, who explained that he was going to have the signature turned into a tattoo.

When one woman near the end exclaimed how much she enjoyed the book, King replied, “You probably had a chance to read the whole thing online.”

Near the end of the two-hour session, King was visibly tired. Still, he willingly posed with squealing members of a group of female Japanese exchange students.

By the time the session was over and King had left the building, Berlin estimated that 140 to 145 people had gotten books signed.

“The fun of it for us is seeing how much people enjoy it,” he said. “People are so appreciative.” 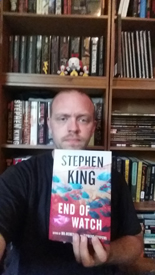