LOS ANGELES (The Hollywood Reporter) --- Nancy Travis (TNT's "Running Mates") leads the cast of "Stephen King's Rose Red," an original six-hour miniseries for ABC from the horror master, which is expected to air during the February 2002 sweep.

Travis is joined by two-time Tony Award winner Judith Ivey ("The Devil's Advocate," "Hurlyburly"), Kimberly Brown ("Tumbleweeds"), Julian Sands ("Leaving Las Vegas," "A Room With a View") and Matt Keeslar ("The Last Days of Disco," CBS' "Durango") in the miniseries, which King wrote after a June 1999 accident in which he was hit by a van while walking near his Lewiston, Maine, home (HR 5/8).

The three-part miniseries tells the story of Rose Red, a dormant haunted mansion built in 1907 by a Seattle oil magnate. An obsessed psychology professor, Joyce Reardon (Travis), commissions a team of psychics and a gifted 15-year-old autistic girl (Brown) to wake the ghosts. Their attempts unleash myriad spirits and bring to light the horrifying secrets of the generations that have lived and died there.

The ensemble cast also includes Kevin Tighe ("Murder One"), Emily Deschanel ("It Could Happen to You"), Yvonne Scio ("Milonga"), Matt Ross ("The Last Days of Disco") and Tsidii LeLoca (Broadway's "The Lion King").

"We're delighted to have Stephen King back at ABC," the network's executive vp movies and miniseries Susan Lyne said. "The script is superb -- vintage King. I can't wait to see these characters brought to life."

Lyne declined comment on the project's price tag but said that elaborate special effects will probably push the budget beyond the $30 million spent on King's "Storm of the Century," his previous original miniseries for ABC.

The producing team of "Storm" is in place for "Rose Red." King and Mark Carliner (TNT's "George Wallace," ABC's "Stephen King's The Shining") have reteamed as executive producers joined by producer Thomas Brodek. "Storm" director Craig Baxley rolled the camera Tuesday,Aug. 22 when "Rose Red" began production in and around Seattle.

The miniseries is produced by Greengrass Prods. in association with Victor Television Prods. and Mark Carliner Prods.

Last year, Travis starred in CBS' short-lived comedy series "Work With Me." She also starred in another CBS sitcom, "Almost Perfect." Her feature credits include "Three Men and a Baby," "Internal Affairs" and "So I Married an Axe Murderer." She is repped by Endeavor. 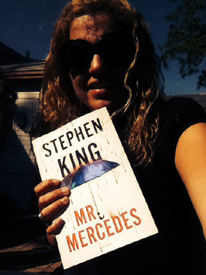