Two of pop culture's biggest names -- Stephen King and John Mellencamp -- are uniting to write a musical, and naturally, it's a ghost story. "Our goal is someday to end up on Broadway," Mellencamp tells Billboard. "We're not going to take it straight to Broadway." The artist knows he and King are bound to make mistakes along the way, "but that's part of the fun of it. See, that's the great thing about this for Steve and I both; we don't really have to do this."

The untitled work was Mellencamp's idea, but King, one of the top-selling authors of all time, quickly agreed to work with the singer, whom he's long admired. "I'm like everyone else, I think he's great," says King. "He's from the Midwest; he's got a nice, sort of 'common people' thing."

For King, the story was appealing. "I was in Florida, so John came down and told me the plot," he says. "It was kind of a ghostly thing, which is why he thought of me, I guess. I liked the story."

The play, according to Mellencamp, is about "two brothers; they're 19 years old or 20, maybe 18 or 21, who are very competitive and dislike each other immensely. The father takes them to the family vacation place, a cabin that the boys hadn't been to since they were kids."

"What has happened is that the father had two older brothers who hated each other and killed each other in that cabin," says Mellencamp. "There's a confederacy of ghosts who also live in this house. The older [dead] brothers are there, and they speak to the audience, and they sing to the audience. That's all I want to say, except through this family vacation, many things are learned about the family, and many interesting songs are sung."

Mellencamp says he's written four songs already for the project, including tracks called "My Name Is Joe" and "You Don't Know Me." Each song is written with the character's personality and age in mind. "I plan to have every person sing from their generation," he says. "This is what I'm thinking right now, but it may not work out this way. When the 18-year-old sings, he'll be rapping at you. When the people in their 70s are singing, they'll be singing in the style of Broadway or the style of Sinatra or country. I intend to cover any type of music that Americans have invented."

While the road is littered with unsuccessful musicals by pop artists, both Mellencamp and King are adopting a "why not?" attitude. "We talked about [Paul Simon's] 'Capeman.' John and I both agree that maybe it didn't work, but that this might," says King. "That's really part of my attraction about working with him. He has a lot of courage and ability to go in there and say, 'This isn't supposed to work, but we're going to do it anyway.'" 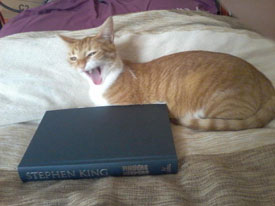