NEW YORK (AP) - Weeks after his near fatal road accident, Stephen King wondered if he would ever write again. He couldn't bend his knee. His hip was smashed. Sitting any longer than 40 minutes was torture.

Convinced he had reached one of those "crossroads moments," the author consulted his wife, Tabitha.

"My wife is the person most likely to say I'm working too hard," King notes in the memoir "On Writing," which will come out this fall. "When I told her on that July morning that I thought I'd better get back to work, I expected a lecture.

"Instead, she asked me where I wanted to set up."

Much of "On Writing" is about the craft itself, but near the end King includes a brief section in which for the first time he writes in detail about the June 1999 collision. The author was struck by a van while walking along the shoulder of a road in his home state of Maine.

"He wasn't on the road; he was on the shoulder; my shoulder," King writes of the van's driver, Bryan Smith. "I had perhaps three-quarters of a second to register this.

"There is a break in my memory here. On the other side of it I'm on the ground, looking at the back of the van, which is now pulled off the road and tilted to one side."

The author of such horror stories as "Carrie" and "The Shining" underwent five operations to set the broken bones in his right leg and hip. He also sustained broken ribs, a punctured lung and a skull laceration. In his memoir he likens the daily "pin-care" treatments for his leg to having it "dipped in kerosene and then lit on fire."

For King's first day of writing after the accident, his wife set up a work station, rolled him there in his wheelchair and kissed him on the temple. He hung in for more than an hour and a half, covered in sweat, but with "no inspiration" to go with his pain.

"There was no sense of exhilaration, no buzz - not that day - but there was a sense of accomplishment that was almost as good. I'd gotten going, there was that much," he recalls.

King estimates he takes about a hundred pills daily and he still spends two hours a day, three days a week, in rehabilitation. He sometimes leans upon a cane, but at a recent reading in Manhattan he strode on to the stage unaided.

"(A)s my leg begins to heal and my mind reaccustoms itself to its old routine - I feel that old buzz of happiness, that sense of having found the right words and put them in a line," he writes.

"I still don't have much strength - I can do a little less than half of what I used to be able to do in a day - but I've had enough to get me to the end of this book, and for that I'm grateful." 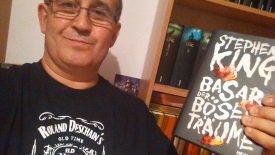