NEW YORK (AP) Eleven months after a motorist nearly killed him on a road in Maine, novelist Stephen King strode unaided to the stage Friday night at a Manhattan night club where he made his first public appearance since the accident.

King rendered a spirited reading of a short story he had published entitled, "L.T.'s Theory of Pets." The renowned teller of scary stories -- who in recent years has branched into different subjects to much acclaim -- was one of several writers kicking off the inaugural The New Yorker Festival this weekend.

"It's nice to be here," King said to the crowd of about 300 people gathered at the Bowery Ballroom. "Actually, it's nice to be anywhere."

Many in the audience rose to applaud King and one young woman exclaimed, "It's nice to see you."

On June 19, 1999, King was struck by a van while walking along the shoulder of a state road. The driver pleaded guilty to a charge that meant no jail time, which left King infuriated.

These days, King remains hobbled, sometimes leaning upon a cane in his left hand. The writer, who still lives in Maine, has lost weight but spends two hours a day, three days a week, rehabilitating his body from the injuries, which included broken ribs, broken bones in his right leg, a punctured lung, and a skull laceration.

"I feel pretty good," King said in an interview before his reading. "I'm not strong but I'm feeling better."

In a display that showed he hadn't lost his sense of humor, King told the crowd that The New Yorker had been very good to him over the years. He went on to say he had selected a piece that was not published in the magazine, although it sounded "sort of like a New Yorker story."

And if the audience didn't like it, he told them they should consider the ramification of booing someone who still uses a cane. A broad grin stretched across his face, and the crowd howled with laughter.

The New Yorker created the literary and arts tribute to celebrate the magazine's 75th anniversary. Throughout the weekend, celebrities including Salman Rushdie, Alec Baldwin, Paul Simon and Kofi Annan are participating in the celebration.

But on Friday, much of the excitement was generated by King, who has published more than 50 best sellers, such as "The Shining," "Carrie," "Bag of Bones," and "The Green Mile."

Before the reading, he claimed to be nervous for his self-proclaimed "coming-out party." Still, he said it was easy to accept The New Yorker's request because of the magazine's "prestigious" reputation. And, he said, it would be fun.

"You don't want to do anything that you can't have a good time doing," he said. 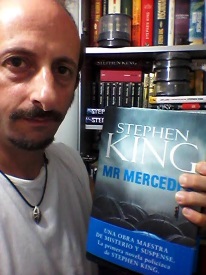