Here is the transcript from the chat:

Thanks to Bev Vincent for sending the transcript! 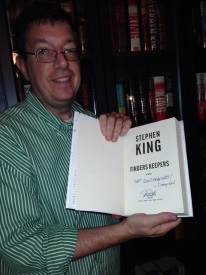