Stephen King will sign a new three-book deal later this week -- proving that there will be more Stephen king books after his accident.

King has been walking on a crutch since suffering 25 broken bones in his hip, right leg and pelvis, a collapsed lung and other injuries. "He was pretty well mangled," said King friend Stu Tinker, owner of Betts Bookstore in Bangor. "It's amazing that in this short a period he's able to get up and around and drive by himself."

The new publishing deal is for three books, "one of which is completed and the other two that he's working on," Greene said. The agent would not say what the new books are or if the deal is with King's publisher Scribner, or another house.

King has finished a non-fiction book on writing. Scheduled for a September release, that volume completes his three-book 1997 deal with Scribner that was unusual because it was light on up-front royalties but heavy on profit-sharing. 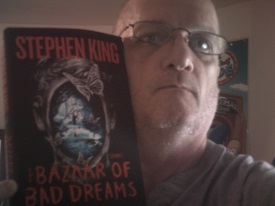