King made $65,000,000 last year.
Here is the list of athletes and celebrities who made $25 million or more last year (King is on 6:th place) according to Forbes (in totals in millions of dollars):

King writes about The Plant in The Time.

In a mail to SKEMERs, King's assistant reported that King will do a voice over on the Frasier show on December 12th. King will be doing a voice over as one of Frasier's call ins (as the caller identified as Brian).

Here is an article King did in Bangor on the 26:th.

...and here is another one.

"Stephen King Projects: Director Mick Garris (The Stand & The Shining mini-series) was a part of the Blair Witch Webfest over the last few days and spilled details on the status of various other Stephen King novels becoming films. Garris has written a film adaptation of King's recent web novel entitled Riding the Bullet though it hasn't moved ahead from there yet. The future of the Desperation movie is finally looking a little brighter, scooper 'TylerDFC' had this to say: "I asked him what was being cut and if it was being toned down from the novel due to the US congressional "witch" hunt. He said the reason that it is hard to get off the ground is that they do not want to cut anything out of it and keep it brutal and hard hitting. As a note if you haven't read Desperation it is extremely violent and brutal with entire families being murdered" (Ed. Note: As long as they keep that creepy scene in there with the wife trapped in a pitch black room with spiders, snakes and scorpions crawling all over everything, I'll be happy). King's Sun Dog IMAX project hasn't progressed much, though its definitely set to be in 3-D, while Garris has one non-King project on the way - he's possibly working with "L.A. Confidential" novelist James Elroy on the film "Clandestine". Thanks again to 'TylerDFC'."

King and Mellancamp is developing a Musical.

Listen to an interview with King from Fresh Air. Thanks to Ed Yarb for pointing out the link to it.

Here are 2 articles about Bryan Smith's death. #1 and #2.Thanks to Bev Vincent for pointing out the links.

In the issue of USA Today from September 22:nd King has a section called BOOKSTREET where he has written something called Advice for Writers. This is 10 steps on how to write.

In a letter to the Editor of New York Time Sunday Magazine King apologized about stuff he had said in an interview with The New York Time
Here is what he said:

WHAT IS STEPHEN KING TRYING TO PROVE?

The chief hazard of the interview process is that there is never a chance for a second draft, where one may revise or delete badly expressed and sometimes downright idiotic comments. In the course of my talk with Stephen J. Dubner (Aug. 13), I spoke slightingly of my daughter's hard-won religious beliefs and, in an effort to express my admiration for my younger son's fiction, managed to make it sound ephemeral instead. His stories, witty and sharply observed, are fine examples of craft and character. The reason I didn't say that in the interview, so far as I can tell, was that my mouth was too full of my own foot. I apologize to my kids, who deserved better from their old man.

King will be doing an AOL chat for The Plant on September 19:th.

Songs by The Rock Bottom Remainders can now be downloaded from mp3.com.


Article about King from The New York Times 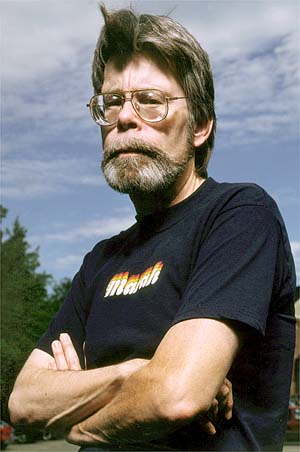 In the article in The New York Times King says that he has finished Dreamcatcher and that it's 900 pages long. He also says that in On Writing he invites his readers-writers to submit their work to him. The best offerings he might publish in the paperback edition of the book.

To read the article you must be registered at their site but it's free.

King in Pittsburgh to research for new book

Some residents of Butler and Lawrence counties spotted the horror author Sunday and Monday at a state police barracks and at a Red Lobster restaurant. Apparently, King visited the area, about 35 miles north of Pittsburgh, to research rural life for a new book.

Trooper Rob Lagoon said King toured the state police offices while keeping tightlipped about the story. The author did say it should be out in 2003 and would be set in an area like western Pennsylvania.

Tina Slupe, the general manager of the restaurant where King ate, said employees recognized King and asked for his autograph.

"He told them he would give the autograph and he wouldn't bite, but if 20 people approached him seeking an autograph, he would bite," Slupe said.

King, a resident of Maine, is the best selling author of "Misery," "Carrie," "The Shining", "Pet Sematary" and "The Green Mile" among others.


King to promote On Writing

King will promote On Writing on GMA Oct. 2:nd.

King goes to Springfield on November 12.

King will release a new short story next month.

Read a review of the script for Hearts In Atlantis.

Is it time for The Shining part 2?

King recalls fatal accident in the book On Writing.

Read about King's first live appearance since his accident...


The Man in the Black Suit

The Man in the Black Suit as a music theater piece...

And the winner is...

...not The Green Mile. When the winners at the 72nd Academy Awards were announced "The Green Mile" didn't get any Oscar's. And even if this was expected it should at least have gotten at least one of the 4 it was nominated for.

Stephen King will do his first public appearance since his accident on May 5:th in New York!

On May 5:th The New Yorker magazine is celebrating their 75:th anniversary by having a weekend-long festival. The whole thing begins on Friday, May 5.

There has not been any word yet on what King will read...

Stephen King got nominated in two categories when the nominations for the Bram Stoker Awards were announced. "Low Men In Yellow Coats" was nominated for best novel (because it's 90,000 words long it's considered as a novel.

"Hearts In Atlantis" was nominated for best fiction collection.

The result will be announced at the beginning of May.

King gets recognized for Lifetime Achievement:

NEW YORK--(BUSINESS WIRE)--Feb. 17, 2000--Telecare TV, Channel 25, will be holding the Second Annual Monsignor Thomas J. Hartman Awards (the "Tommys") on March 21st. The award, named for Father Tom, was created to honor those individuals from business and the arts who demonstrate an extraordinary level of excellence in communication and service to the community. This year's outstanding honorees are: (Electronic Media): Charles Dolan, Founder & Chairman of Cablevision Systems (Humanitarian): Coretta Scott King, dynamic civil rights and peace crusader. (Print Media): Stephen King, the world's most successful writer. (Lifetime Achievement): The Most Reverend John R. McGann, beloved leader of one of the largest dioceses in the country, who retired this year.


And the nominees are...

King's health seams to be getting better every day!!!

Stephen and Tabitha pose for photographers as they arrive at the premiere of The Green Mile at the Ziegfeld Theater in New York City on December 8.

ABC signs a deal with King on Rose Red.

King has signed a 3-book deal with Simon & Schuster and the titles are...

Bryan Smith gets away... 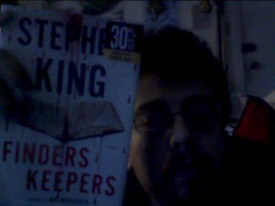