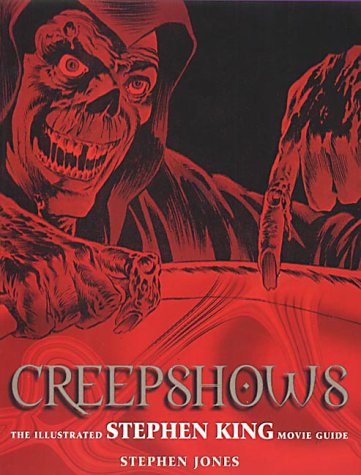 When I got Creepshow - The Illustrated Stephen King Movie Guide in the mail I was first surprised that is was such a big (in it's format) book. I was expecting a smaller one. Then when I started reading it I was also surprised that it was so rich with information. Creepshow - The Illustrated Stephen King Movie Guide is the best book about King's movies that I have seen to this date.

The book describes almost all the movies based on King's work. There are some of the more anonymous ones that it missed but otherwise they are all included. And with all I mean all movies, TV movies, TV series, miniseries (all the way up to Rose Red), short films, dollar-babies, upcoming movies, unaccredited movies loosely based on King's work and so on…

Every chapter begins with a short description of the movie. This one is short and that is something I like. I mean, most readers have seen the movies and don't need to be remained of the plot, right? The space is better used if there is other information about the movie, and that is just what this book gives the reader. The author Stephen Jones has gone through what seems like a ton of interviews with King and others who have done movies based on his work. Jones presents loads of facts about the making of the movie, different scripts, fun stuff about the movie and it's making among other things.

To name a few I can reveal that Christopher Reeves was considered for Arnold Schwarzenegger's roll in The Running Man and that there where a lot of other actors considered for the role of Paul Sheldon in Misery before it went to James Caan. This goes on through the book and all the movies and I can just say that I loved to read it! It was great!

This is not all though. Besides a run through of all the movies we also get info about what's on it's way when it comes to King movies, a look at the shorter movies done from King's work, unproduced projects (including things called The Machines and The Stephen King Playhouse), movies King has been in, movies that appears to be based on King's work but not credited to King (this one even includes an XXX-movie supposedly based on The Shining…), TV things and plays, radio shows and computer games based on King's work.

As if this wasn't already enough there are also an interview with King and a section with short description of many of the people that has been involved in King's movies through the years.

Author Stephen Jones has really put a lot of work into this book, and it really shows!

This is an extremely complete book (both when it comes to released movies and unreleased movies) but it's also a very easy book to read and well illustrated with pictures from the different movies.

Personally I think this is THE book when it comes to books about movies based on King's work. Go out and get it NOW!!!