I have just read The Devil's Wine edited by Tom Piccirilli and unfortunately I must confess that I'm not a big fan of poems, not even those by Stephen King. The book itself is very nice and you can tell by reading the introduction that Tom really loves his poems.

If you, like Tom, love poems this book is totally right for you. Personally I think it's a nice addition to my King collection but it's not something I'm going to read again I'm afraid. It just doesn't do anything for me.

One thing that is fun with this book is that it's always interesting to see other sides of your favorite authors, like King who hasn't published that many poems earlier and isn't known for his poetry. Here though you get a chance to see that side of him. The poems by King in the collection are from late 60s/early 70s so there isn't anything new but it's still interesting to see how he was with words back then. It does give you a feeling of his background. It's almost the same feeling as when you read one of his really early short stories.

Other known names that appear in the book are, to just name a few, Peter Straub, Ray Bradbury and Jack Ketchum.

If you're a fan of poetry you should definitely get The Devil's Wine. If not maybe you should think about it a bit longer. It's really nice to have King's old poems in the collection and I would miss them if I didn't but I'm not sure it worth buying the book for… 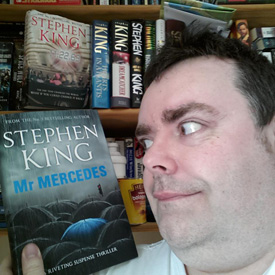