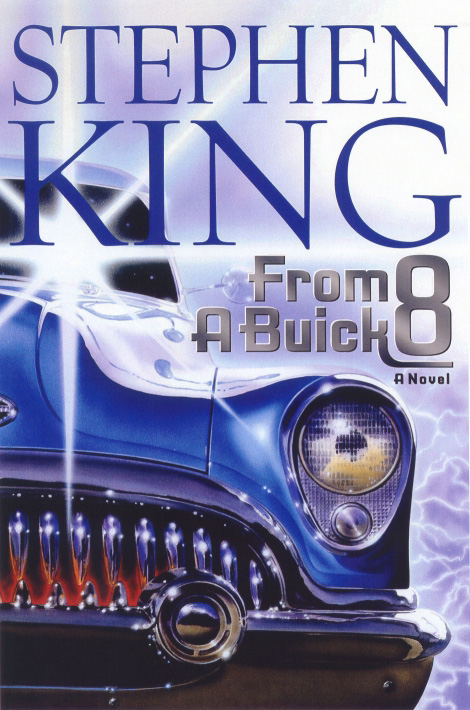 From a Buick 8 tells the story of a Buick that isn't from this world. Here is a car that is left by a man in a black coat on a gas station in 1979. Pretty soon it's apparent that there is something really strange about the car.

The Buick ends up in Shed B at the local Pennsylvania State Police headquarter. Off course all the fellows at Troop D gets really interested in it but especially trouper Curt Wilcox, who gets obsessed with it.

What's so strange about the car then? Well, for starters it can't get dirty. If you put a piece of dirt on it's tires it will fall of whiten a few seconds. All it's interiors is fake and the car can't be driven?!?!

Troupers from Troop D tell this story. They are telling us and Curt Wilcox son, Ned Wilcox, what happened the day the car was abandon as well as what has happened with it up until today. The character that tells the most of the story is Sandy but there are others as well. Characters like Eddie, Shirley, Huddie and the Swedish janitor Arky Arkanian.

After awhile it's apparent that the Buick is some sort of gateway in to another world. This gateway goes both ways and during the years it sits in the shed out at Troop D there are several persons missing, taken by the Buick as well as things, you can't tell what they are, getting out from the Buick's trunk.

Every time there is something or someone coming out of the trunk of the Buick it's proceeded by a purple lightning. At first all the troopers are really scared that the lightning is something really dangerous but later it's clear that it's harmless…as long as you don't enter the shed. 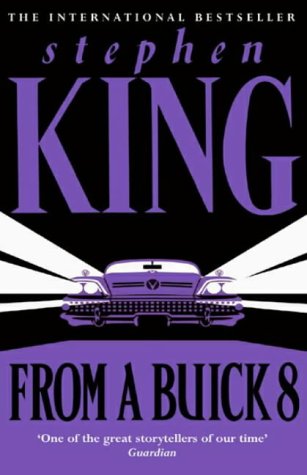 Curt, who is the one that takes charge when it comes to the Buick, soon put some animals in the car when it's time for one of it's lightning's. One time he puts two gerbils in, Jimmy and Roslyn, and only one of them returns.

There aren't many connections to King's other works in From a Buick 8. The only one that I found is the mention of Inside View (the same magazine that appears in The Dead Zone and The Night Filer). Another connection is the mentions of Cynthia Garris. In the book she is a waitress but in reality she is the wife of Mick Garris, the same man that did King's The Shining and The Stand to name a few.

It took King 2 years to finish From a Buick 8. King started it in 1999 and finished it in 2001. This wasn't because King was writing slowly. It was because he was in the accident. King had written a first draft before the accident but felt that he needed to get more info about both Pennsylvania and the Troop. This wasn't possible which his injuries though. If the accident hadn't happened we would probably have seen this one before Dreamcatcher (released in 2001).

From a Buick 8 is a really good book. It's an easy read and it's a great story. Many people have raised the concern that it would be too much like Christine... Let me tell you this; don't worry. From a Buick 8 are nothing like Christine, if you don't think that the fact that they both are about cars make them the same book.

If this is King's last "normal" book (not counting the upcoming Dark Tower books) which he has hinted that it might be. From a Buick 8 is a great last book. It shows King's ability to tell a really good story. Go get it now! 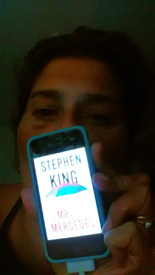