The Mist: Different But Faithful

Head over to Entertainment Weekly for loads of info about the upcoming The Mist TV series.

Here is how Christian Torpe sees it:

“I wanted to be respectful to the source material, but my feeling was there was already a great adaptation out there by Frank Darabont. The novella is 200 pages and one location, and we needed to change that to make an ongoing series. But we wanted to remain faithful to the heart of the story,”

The TV series will be different compared to King’s story and Darabont’s film. It will be it’s own but at the same time remain faithful to the heart of King’s story.

While the series will try to establish a different story from the King novella and the Darabont movie, Torpe did hint at some possible crossover later in the show. “It’s a weird cousin to the original material,” he says. “It has a constant ebb and flow communication with the novella. But who knows? Maybe some of the original characters will make a cameo at some point.”
For him, The Mist serves as a chance to use a horror story to explore real life dynamics, much as The Twilight Zone did decades ago. 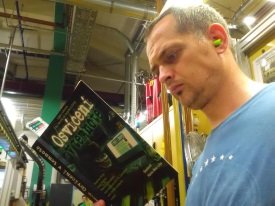