The War Is Over, Gunslinger

The first look at The Dark Tower came this Monday during Cinemacon, the annual gathering of cinema owners from around the globe and Hollywood studios who come to Las Vegas to show their wares. Here is a recap of what was shown.


"The war is over, gunslinger," says the Man in Black — a purrier-than-usual Matthew McConaughey in this case — and thus begins the first footage ever seen from Sony Pictures' adaptation of the Stephen King saga The Dark Tower.

The two minutes or so played like a trailer, showing scenes from the epic, era-spanning post-apocalyptic story that King began in the early 1980s. McConaughey plays the Man in Black, a timeless villain who seems in the film version to have ... the Force?

Wearing a simple black shirt and pants, the Man in Black's abilities include stopping bullets between his fingers without looking, moving fallen shards of glass out of his umbra and other telekinetic abilities that would impress Yoda himself. Even if he was just trying.

And then there's Roland the Gunslinger, played by Idris Elba, the last of an ancient order of protectors who roam the wasteland. We first met Roland in The Gunslinger, and like the books, his abilities lie mostly in the chambers of two heavy six-shooters.

We see Jake and Roland walking in front of the wreckage of war, and at one point, during the chaos of some kind of raid, Jake is being stolen away by one of the Man in Black's goons. Roland looks to the ground and takes along pause, raising his pistol of to some unseen target, waiting until his instincts tell him to fire. The bullet whizzes through various points in time, then finds its mark — Jake's kidnapper is dropped to the ground and the boy is ostensibly saved in a single shot.

Other visions we glimpsed: The tower falling (!!!) and its reverberations rippling through time, giant moons eclipsing on the horizon in the Gunslinger's realm, a wall with the phrase "All Hail the Crimson King!" scrawled in red as the Man in Black walks past and a major showdown between Roland and Black in an abandoned building.

Head over to Mashable for full recap. 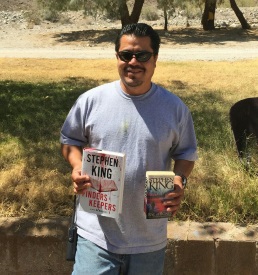