1 Hour Special Under the Dome

CBS will air a one hour special for Under the Dome on June 23. Here is the press release.


CBS TO AIR “UNDER THE DOME: INSIDE CHESTER’S MILL,” AN EXCLUSIVE ONE-HOUR SPECIAL LOOKING BACK AT THE FIRST SEASON AND AHEAD TO THE SECOND SEASON PREMIERE, ON MONDAY, JUNE 23

LOS ANGELES – CBS will air UNDER THE DOME: INSIDE CHESTER’S MILL on Monday, June 23 (10:00-11:00 PM, ET/PT). This exclusive one-hour special looks back at the premiere season of the hit summer series, featuring highlights from last season as well as new interviews with the cast and executive producers. In addition, the special will tease what lies ahead for the residents of Chester’s Mill who are still trapped under the mysterious dome with an advance sneak peek at the season two premiere.

UNDER THE DOME returns for its second season Monday, June 30 (10:00-11:00 PM, ET/PT) on the CBS Television Network, with an episode written by bestselling author and executive producer Stephen King. 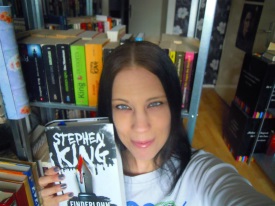