President Obama not Under the Dome

Apparently CBS originally used a speech delivered by President Obama in the pilot for Under the Dome but then got concerns about using actual audio in this specific fictional context and decided to edit it out.


Audio from a President Obama speech delivered in the wake of Hurricane Sandy had been used in an episode of CBS ‘s Under The Dome but has since been cut, the network confirms. “The audio of the President in the final scene will change,” said CBS in an official statement. “The scene cleared broadcast standards, but both Amblin TV and CBS had concerns about using actual audio in this specific fictional context.” The Stephen King adaptation premiering June 24 follows the residents of a small town that becomes isolated from the outside world by an invisible barrier. The Obama clip had been briefly integrated into fictional news reports on the events within the show at the end of the episode. The version sent to critics for review two weeks ago was not final. CBS and Amblin Entertainment opted to edit out the audio on Thursday. 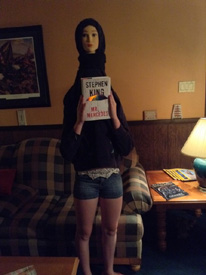