More about Under the Dome from Crave Online:


At CBS’s executive session with Nina Tassler, Tassler showed a promo video for their upcoming summer series “Under the Dome;” which is based upon Stephen King’s epic novel of the same name. Tassler said the show begins shooting in February in Wilmington, NC and it will air this summer, with promos playing during the SuperBowl.

Tassler then showed the video which featured King and screenwriter Brian K. Vaughan discussing the series, with a few clips and animatics illustrating how graphic the show might be. People and cows sliced in half by the dome landing, a plane crashing into the dome in mid-air, townspeople ransacking supermarkets and washing their bloody hammers from God knows what kinds of murder.

“At the time that it comes down, the wife of the town’s selectman is taking flying lessons and the plane hits this invisible dome,” described King. “The pilot just sees the nose of the plane crumble and parts of the plane hit the ground. The gradual realization of what this thing is should be powerful. I thought of it as a force field. TVs won’t work, electronics won’t work.”

Vaughan added another gory detail about the dome’s EMP quality. “If you get too close to it, pacemakers will explode out of your body.”

King spoke my language when he added that “Under the Dome” would deal with how long supplies last when the town of Chester’s Mill is cut off. “There’s only so much heat, only so much food. It was a chance to talk about the depletion of resources and how people behave in extraordinary circumstances.”

The plan for “Under the Dome” is to make it last even longer than the 1000 plus page book will take to read. “It’s very exciting to take the idea of the book and possibly expand it,” explained King. “That’s what TV is for. It’s an expansive medium. The novel only covers a short period of time. The idea of the TV series is not to extended it for a week, but months.”

Of course, no movie or television show is exactly like the book, and King seemed okay with Vaughan’s changes.

“I read Brian’s pilot script and thought it was terrific,” noted King. “It’s like the book in a lot of ways. It takes different directions from the book in other ways and that’s good. I think that Amblin television is the natural place for ‘Under the Dome’ to go. I always felt like [Steven] Spielberg’s view of American Life and mine are similar. We both see the extraordinary things in ordinary things and people.”

King is known most for horror, but let’s not forget that the best of King crosses genres like Stand By Me, Misery, The Shawshank Redemption and The Running Man. “‘Under the Dome’ combines action, intrigue, drama, mystery, romance, sex,” offered Vaughan. “Different characters will have different relationships with the dome. What happens to people involved, blossoming romances when they’re cut off from society. It’s going to bring out the best in some people and the worst in other people.”

Like King’s fictional New England town of Castle Rock, Chester’s Mill will become a rich place for viewers to visit each week.

“In small towns, we think we know everybody else’s business and everybody holds back,” said King. “Some of the people in ‘Under the Dome’ are pretty sick indeed. If people like the show, it won’t have to end after X number of pages. They can come back to Chester’s Mill week after week and obviously I hope that’s what will happen.” 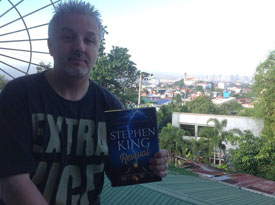