I got this very interesting news from The Mason Award Event that took place last night. It appears King is almost finished writing a sequel to The Shining, Dr. Sleep. It will be about Danny Torrence as an adult and some sort of vampire like people called "The Tribe" that drive around in mobile homes and feed on psychic energy.

King read a chapter from it at the event and the nice part of it is that there is a clip of it on YouTube!

King also signed books after the event for almost 3 hours. He signed any book that people brought but only 1 book each.

Thanks to Joe Camillieri

Read all Doctor Sleep news
To the news archive 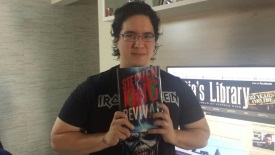