According to Fangoria King has taken back the movie rights to Dolan's Cadillac:

Four years ago, Stephen King gave up-and-coming writer/director Stacy Title the rights to make the movie out of DOLAN’S CADILLAC, one of the tales in the anthology NIGHTMARES AND DREAMSCAPES. Six months ago, after a lengthy and ultimately fruitless development period, King took the rights back.

“He was incredible and very generous about the whole thing," says Title ... “He loved the script when he first read it and then, all of a sudden, he changed his mind. I did a lot of drafts for free, so it was disappointing.”

While Title had the rights, with the now-defunct Franchise Pictures and producers Tom Cruise and Paula Wagner also attached to the project, a number of high-profile actors drifted in and out of the adaptation of King’s story, in which a man seeks vengeance against the Las Vegas mobster who has murdered his wife. “First, Sylvester Stallone was supposed to do it,” Title recalls. “Then Cuba Gooding Jr., then Val Kilmer, then Freddie Prinze Jr. and then Gabriel Byrne. A lot of people were interested in doing this picture.”

Title does not hold a grudge against the horror author. “He waited a long time for this to happen,” she says. “It wasn’t his fault. I thanked him for the rights when I had them. All I can say is that I tried.”

Thanks to Rocky Wood.
Read all Dolan's Cadillac news
To the news archive 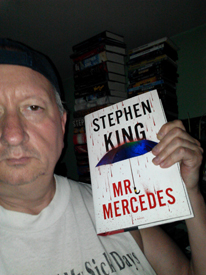