More news about Bag of Bones:


Two men behind a movie based on Stephen King's 1998 novel "Bag of Bones" will be in Portland today to discuss the possibility of filming in Maine.

"Bag of Bones" director Mick Garris and producer Mark Sennet are scheduled to talk about their plans at a press conference at 4:30 p.m. at the Hilton Garden Inn on Commercial Street.

They are also scheduled to meet sometime today with Gov. John Baldacci and other state officials to explore financial incentives for the film.

Sennet, whose credits include a TV adaptation of King's 1996 novel "Desperation," said his production company would like very much to shoot in Maine, but won't be able to without greater incentives than those offered to filmmakers under the Maine Attraction Film Incentive program.

Sennet said his company would need a tax credit that would provide a savings of about 25 cents on every dollar spent. He said many other states have such programs.

"Bag of Bones" has a $20 million budget, and Sennet expects to spend $10 million wherever the film is made.

"We'd love to do it here. We're basically here to see if (state officials) want to do this," Sennet said. "If not, there are plenty of places we could go."

Sennet said Massachusetts has the kind of tax-credit program he is interested in. His company, Sennet Entertainment, has explored filming in the Bay State, as well as in Michigan, Louisiana and Georgia.

Set at a lake in western Maine, "Bag of Bones" is about a novelist dealing with his wife's death, a custody battle and a haunted house.

The fact that King is a lifelong Mainer will have little to do with whether the film gets shot here, Sennet said.

"We'd love to do the film, but we need to do it for a certain price," he said.

A call to King's Bangor office was not returned Monday.

Sennet said he would like to shoot the film this summer. The movie has not been cast.

The meeting with state officials today is expected to include Maine film industry advocates Cameron Bonsey and Barney Martin.

Bonsey, who was a local casting director for the HBO film "Empire Falls," shot in Maine in 2003, and Martin, a locally based actor, have long advocated for more state incentives to attract film and video projects to the state.

It was Martin who convinced Sennet and Garris to come to Maine to meet with state officials, Sennet said.

Bonsey said "Bag of Bones" is an example of the kind of film Maine could attract if more incentives were offered.

"We wanted to bring in a project that's real, instead of just talking about incentives in a general way," Bonsey said.

The state's current film incentive program includes a wage-tax rebate, an income-tax rebate for investors, no state sales tax on most production items, and reimbursement for lodging taxes for long-term stays.

Baldacci's deputy chief of staff, David Farmer, confirmed that the filmmakers had requested to meet with the governor, but he said Baldacci does not know what sort of incentives they are seeking. 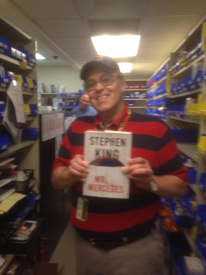